ANN Exclusive:
Why Not Fly a FanWing?
New Technology Flies on Model, May Open Door to New Era of STOL

If the Osprey eventually gets bagged, perhaps there's another way to get in and out of tight spots, without using a chopper: a FanWing design.
Simply explained, consider a long squirrel-cage fan in the leading edge of a wing, grabbing leading-edge air and throwing it over the top of the airfoil. This concept led a clever American, who lives near Rome, to think that maybe that giant fan could do the jobs of thrust and much of the lift, simultaneously. The result, he reasoned, could be an efficient lifter with stellar short-field performance.
The design would be insensitive to angle-of-attack, and thus would be effectively stall-proof. Professional Engineering magazine explained the controls: "A small flap at the wing's leading edge controls lift and thrust. By increasing the lift and thrust on one wing and reducing it on the other, the aircraft will turn without yawing. [The author may have meant, 'rolling' --ed]. As speed is reduced, lift decreases, and the aircraft descends gently to the ground." Engineer F. Marc de Piolenc writes on the company's website, "There is a wing, hence the machine does have the ability to make a forced landing under control in the event of rotor or engine failure. Wing area can be chosen based on risk assessment-based criteria - the designer has more freedom in this respect than with conventional propulsion." 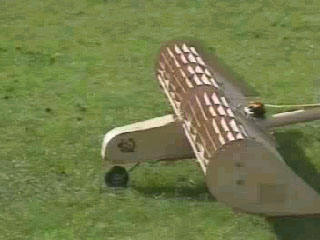 Additional testing showed that the mechanism was ideal for slow flight, and had the bonus of very quiet operation. Applications -- such as intracity transport -- immediately started popping into their heads. Inventor Patrick Peebles says, "'It's a sky barge: slow, looks funny, chugs along, but it carries anything, costs peanuts and it gets there." As an alternative to the taxicab from the airport, it's already looking pretty good, particularly in cities where the airport can be hours from the city it's supposed to serve, e.g., Chicago's O'Hare, Detroit's Metro, or Denver's DIA. Even at its low speed, it wouldn't encounter on-ramp gridlock. Mr. Peebles admits it's slow; you can't have everything: "For now it is pretty slow. Again this is something that needs research. It should be able to fly at about the same speed as a helicopter." Slow, relative to an airplane -- plenty fast, relative to a taxi!
The team liked the idea, but had to prove it, and started a company in England to build model prototypes, and do pioneering engineering work. A series of wind tunnel tests showed that they were on the right track, and subsequent model aircraft have shown that the contraption can indeed fly, and that it's even quieter than they had hoped.
With a "glide" ratio demonstrated in the flying models of just about 2:1, the team recognizes the need for some sort of autorotational capability, so that, if the engine quits, the trip down won't be too awful. Pat Peebles wrote us, "In recent tests, I managed to get the rotor speed up considerably.

The glide ratio would now be close to 3:1 . This is not very good if compare with a traditional airplane, but is quite reasonable if compared to a helicopter or an autogyro." One stopgap under consideration is a ballistic recovery system. Of course, multiple engines would be a normal configuration on a FanWing of any considerable size -- and without any offset thrust lines! (They still wouldn't address a fuel shortage, though...) As the company's financing develops, more research will, of course, be made in this area.
We also asked Peebles if the design were more, or less CG-sensitive, owing to its leading-edge rotation. He told us, "The sensitivity is about the same as on a traditional aircraft. Too far back and you get into a funny flying angle. The FanWIng will not stall, but it will lose altitude."
FMI: http://www.fanwing.com/